A while back we told you that one of Dulwich Picture Gallery’s 270 paintings had been deliberately replaced by a fake. (Would you be able to spot a forgery?)

The identity of the painting has been revealed today as Jean-Honoré Fragonard’s Young Woman. It is  one of Fragonard’s quickly executed studies known as Figures de Fantaisie (Fantasy Figures), intended to showcase the artist’s skilful handling of oil paint. The 18th- century portrait was temporarily removed on 10 February and replaced with a replica produced in China, which had been copied from a high-resolution digital image.

The original has now been put back in its frame and is hung beside the replica, where visitors can compare and contrast the two until 26 July. The curators advise focusing  “on the virtuoso daubs and dabs that define the intricate lace and costume and decide for yourself how successfully the copyist replicates an extraordinary sense of originality!” 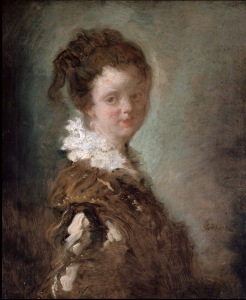 The gallery has seen visitor numbers quadruple in the last three months as visitors tried to guess at the replaced painting. “Never before have I seen so many people actively looking at each painting”, the curators said. However, they should have looked harder. Out of the 3000 votes cast, only 10% correctly identified Fragonard’s Young Woman.

The original is now back in its frame